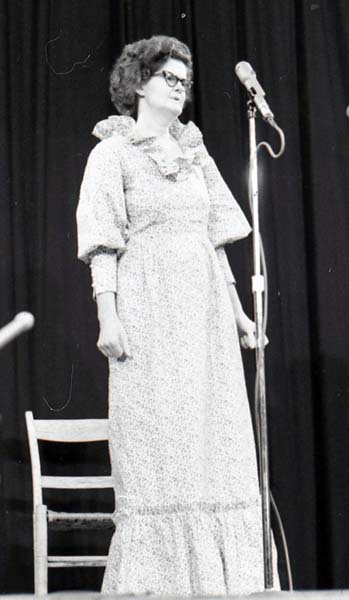 Please join us at the historic MacFarland-Hubbard House, West Virginia Humanities Council headquarters in Charleston on September 8th from 5:30-7:30 for a concert by esteemed Gilmer County ballad singer Phyllis Marks. The program, which will be recorded and archived at the American Folklife Center at the Library of Congress, will include a performance, Q&A, and reception. It is free and open to the public.

The West Virginia Humanities Council would like to thank the American Folklife Center and ZMM Architects and Engineers for their generous support of this event.

Phyllis Marks, age 89, is according to folklorist Gerry Milnes the last active ballad singer in the state who “learned by heart” via oral transmission. Marks was recorded for the Library of Congress in 1978 and has performed for 62 years at the West Virginia State Folk Festival in her hometown of Glenville. Phyllis Marks is among West Virginia’s finest traditional musicians and a master of unaccompanied Appalachian ballad singing. Following her performance, Marks will give a brief interview with WVU musicology professor and West Virginia native Dr. Travis Stimeling.

The concert is supported by a 2016 Henry Reed Fund Award from the American Folklife Center at the Library of Congress. The American Folklife Center’s (AFC) Henry Reed Fund was established in 2004 in honor of West Virginia old-time fiddler Henry Reed with an initial gift from founding AFC director and fiddler Alan Jabbour. The fund provides small awards to support activities directly involving folk artists, especially when the activities reflect, draw upon, or strengthen the archival collections of the AFC.

Find more details on the concert via our press release and on Facebook.