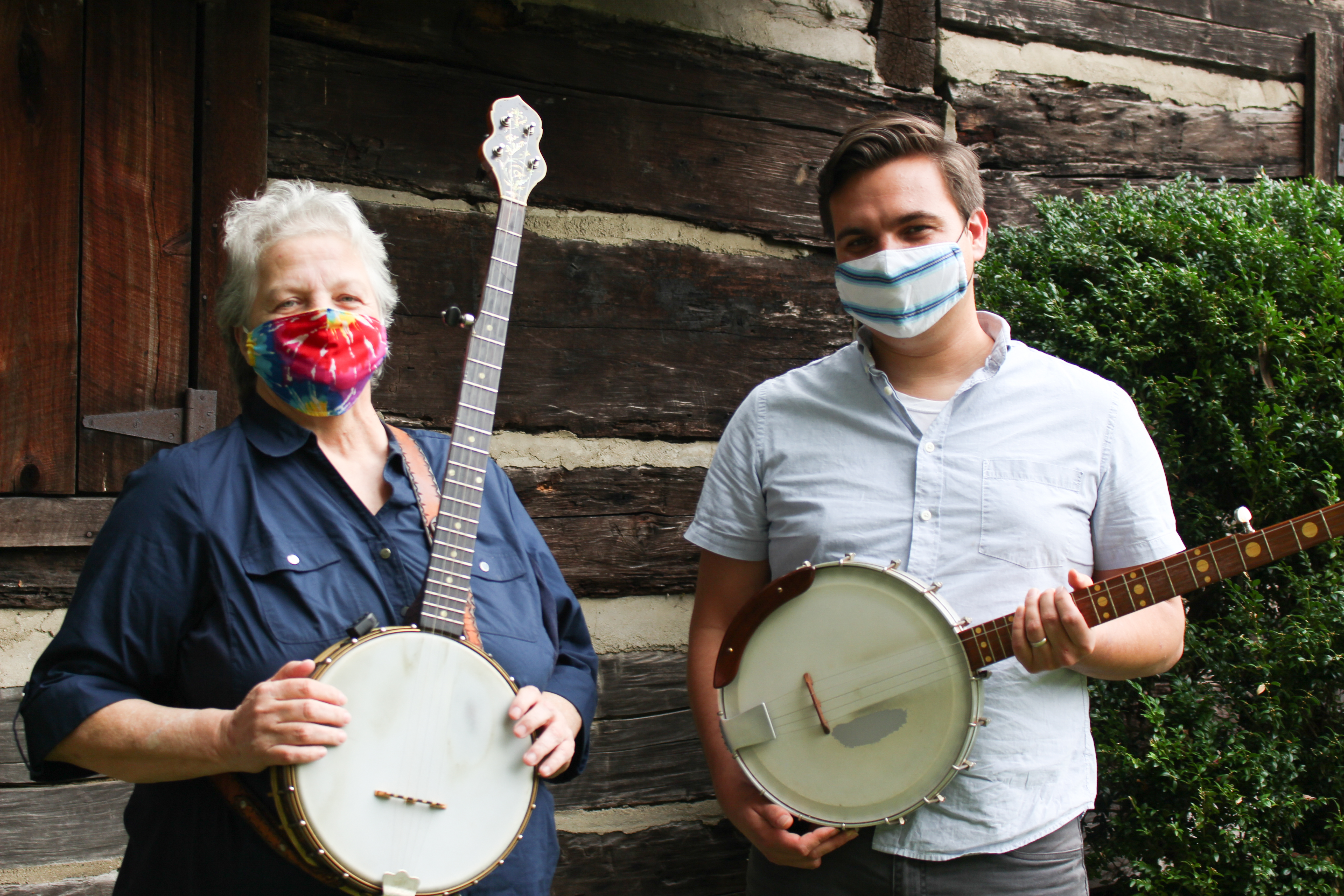 Kim Johnson of South Charleston is leading an apprenticeship in banjo traditions of central West Virginia with apprentice Cody Jordan of Charleston. Johnson began playing with fiddler Wilson Douglas in 1979 and has played with and learned from many acclaimed West Virginia old-time musicians including Frank George and Lester McCumbers. She has taught both locally and nationally, at Augusta Heritage Center, Allegheny Echoes, The Festival of American Fiddle Tunes, and the Berkeley Old-time Music Convention. Jordan plays guitar in The Modock Rounders with Johnson, touring across the state and region, and is looking forward to expanding his knowledge of central West Virginia old-time banjo traditions.

I was born in my grandma’s house at Clendenin, WV. Although no one in my immediate family played music, we attended festivals, concerts, etc. whenever we could. I lived at Clendenin for most of my life, until graduating from high school. I then attended Glenville State College, where I was exposed to traditional music at the West Virginia State Folk Festival, a yearly event in Glenville that has been happening since about 1950. The folk festival remains my favorite traditional music event to this day.

After graduating from college in 1975, I came back to the Charleston area, found a job, and bought a banjo with part of my first paycheck. When the Vandalia Gathering began in 1977, I was eager to go. I met Clay County fiddler Wilson Douglas there, and he agreed to help me learn to play. I visited him about once a week, with Wilson playing the fiddle and me struggling along with the banjo. It took quite a while, but I began to catch on after a few weeks. I played music with Wilson from about 1980 until he passed away in 1999. He was a wonderful person, and a fantastic musician and also shared many great stories with me.

I had known Lester McCumbers during this time, since he often played at the same festivals as Wilson. Lester had a bluegrass band at this time, with his son Roger playing banjo. When Roger passed away about 1998, Lester played a few years with his neighbor Carroll Hardway. After Carroll passed away in 2002, I started playing banjo with Lester. We played many festivals, and had many fine times until his death in 2015. The only musician I’ve ever found in my family is Emery Bailey, a fiddler from Calhoun County who was related to my great-grandmother. It is ironic that I played music for many years with Lester McCumbers, who was a close friend of Emery’s.

I have also played quite a lot of music with Frank George, Ernie Carpenter, and Bobby Taylor. Currently, I have been playing the last few years with Jesse Pearson and Cody Jordan in their band, The Modock Rounders.

I was always drawn to the traditional mountain sound of the banjo, most especially the frailing/clawhammer style. This is an old sound straight out of the hills.

There were no banjo camps, YouTube lessons, instructional DVDs, etc. when I was learning to play, during the mid-1970s. I realized that if I wanted to learn to play banjo, I had to visit the old people who played the music and sang the songs. It was an adventure nearly every time I went. Wilson Douglas took me to visit Sherman and Burl Hammons. I would never have gotten this opportunity if I hadn’t taken the time to get to know Wilson. We also visited Ernie Carpenter, Frank George, Sylvia O’Brien, Ira Mullins, Phoebe Parsons, and others. I am extremely fortunate to have been in a place and time to  be able to be friends with these West Virginia legends.

All these older people were very generous with their time, and openly shared their family stories, recordings, and vintage photographs with me. They all felt strongly about sharing their music with others. All these people are long gone now.

I am by no means an expert on West Virginia banjo history and styles. I only know what the older people showed me. And I plan to share this with Cody as best I can.

Boating Up Sandy by Wilson Douglas

Back Porch Symphony by Wilson Douglas

Home Music by The Modock Rounders

From the Country by Bobby Taylor

Possibly my favorite event was playing in the fiddle contest at Clifftop [Appalachian String Band Music Festival] with Lester McCumbers in 2004. Lester won the blue ribbon that year, taking first place among 95 fiddlers of all ages. He had won the senior category several other years, but this one was particularly exciting. Lester was the first fiddler from West Virginia to win the whole thing.

I was raised in Point Pleasant, West Virginia and lived and attended school there until I graduated high school in 2007. My parents were not musicians but were fans of music and I grew up listening to various genres. My dad worked with a guy who was a well-respected bluegrass banjo player in the area and we would frequently attend local shows where he and other people he was associated with were playing. I played music in the marching band during school and also learned to play guitar while growing up but did not play any traditional music until later on. After graduating I moved to Huntington to attend Marshall University. I was living with friends of mine from high school and we played a lot of music then. We were gradually being exposed to more traditional forms of music by attending the Vandalia Gathering and Appalachian String Band Festival in West Virginia. My friends Jesse Pearson, TJ Riffle and I had played music together all through high school and we began learning to play fiddle and banjo by listening to various recordings. We met Kim Johnson at an Appalachian Studies Conference in Huntington and really began diving deeper into West Virginia traditional music at that time. Kim introduced us to various mainstays of the traditional music scene in the state and we have been playing and learning as much as we could ever since.  We formed a group playing mostly music learned from West Virginia traditional musicians and have traveled around the state and country playing for square dances, concerts and various other community functions.

The type of music that we play is primarily a social music played for community enjoyment and participation in the form of dances, worship, and the general appreciation of friends and family. It is typically passed down through oral/aural traditions from older practitioners to younger people. I am no expert on the origins of the banjo or banjo styles present in the region though some research has been conducted. It is my basic understanding that the banjo has African origins and that playing styles and even some repertoire is related to traditional styles played by enslaved people which were brought with them to America. In West Virginia these styles and repertoire were brought by enslaved people and later on African-American workers who came to work in various industries here. White people who were living and working in proximity to these African-American musicians learned their playing style and repertoire which continued to adapt and change, picking up influences from other traditions including Scots Irish, German, Italian and other immigrant communities found in West Virginia and across the Appalachians. While there are many different traditional banjo styles one of the most common is an overhand down picking style which is often called clawhammer. It is commonly played either solo or as accompaniment to the fiddle or singing. This style was and is common in West Virginia. It is distinctive from more modern styles of bluegrass picking. The focus of this style is often rhythmic over melodic and provides a good base for fiddle tunes or accompaniment for singing and dancing. Additionally it is more widely varied than modern styles. Older generations of musicians who were not exposed to commercial recordings and homogenized styles often had personal styles that were unique to themselves. By learning primarily through imitation and aural transmission each player could develop an idiosyncratic style which was rooted in traditional forms yet unique to the player’s tastes and abilities, creating music that allows great personal expression but remaining in a recognizable and familiar tradition. This way of learning continues in West Virginia’s traditional music community.

I came to play traditional music from West Virginia at first by exposure from festivals in the state which promote this type of music including the Vandalia Gathering, Appalachian String Band Festival, and the West Virginia State Folk Festival. Kim Johnson who is my mentor in this project has been a huge influence on both my playing and my approach to this music. Through her I have met many other extremely gifted and passionate musicians from whom I have learned a great deal. I aim to carry on the tradition of making music for the enjoyment of myself and my community and to teach others about this particular style and repertoire. I find value in having a form of art that has been developed and practiced by the people of this place and which carries so much history, contains so much wisdom, and provides so much entertainment.