The State Folklorist’s Notebook is a regular column written by state folklorist Emily Hilliard for Goldenseal Magazine. This article appears in the Winter 2017 issue. 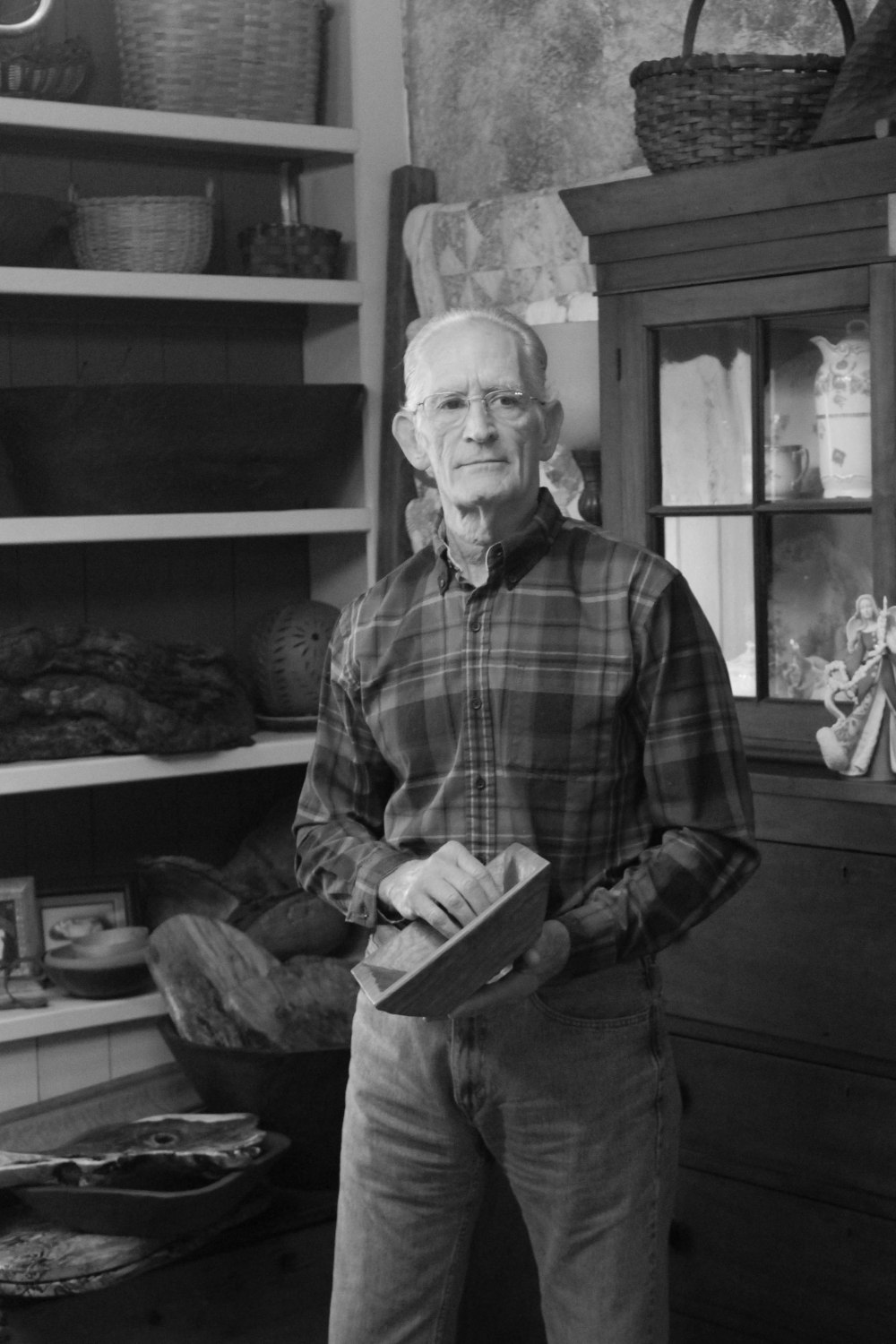 Charles Steven (“Steve”) Adams spent almost 40 years as a social worker dealing, as he says, “with people and their problems.” When he was in his mid-50s and nearing retirement, Steve started carving wooden bowls—now his primary pursuit.

“It’s kind of nice to make something that’s tangible,” he says, “after having worked for 36 years with intangibles. It’s nice to be able to pass on pieces of your work to friends and relatives and also make part of a living from it.”

In 1995, Steve ordered a small hand adze from a tool catalog and made his first hand-hewn wooden bowls, inspired by Tennessee wood carver Rip Mann: “I watched him for several years—used to make fun of him behind his back, saying, ‘Anybody can put a hole in a piece of wood and call it a bowl!’ But after I started making a few, I realized there’s a bit more to it than that.”

And indeed there is. Steve’s bowls generally begin with him felling a cherry, walnut, or maple tree or harvesting the wood from a downed log. With a trailer, winch, and another pair of hands (his son and wife, Jan, often help), he loads the logs and hauls them to a local sawyer who cuts the wood into eight-foot slabs of whatever thickness the tree will allow. The bowl carving itself requires only two tools—a hand adze and a scorer—along with sandpaper to smooth the lip.

Steve enjoys the simplicity of the craft, and he speaks of it almost as if it’s a meditative practice: “It teaches you patience because the wood will only allow you to go to certain extremes,” he comments. “It allows you to think about other things while your hand’s busy. . . . That’s the nice thing about making bowls—you’re basically only limited by the size of the tree and your imagination.”

He makes two types of bowls—a form bowl, with a defined shape, and a freestyle bowl, which is more obviously a product of his imagination and creativity. He works with the imperfections and grain of the wood. Those eccentricities are what make each bowl a unique object, resonant of the individual tree and creation process.

“Sometimes, I’ll start one way, and the wood will disagree with me, and it ends up going the other way,” he says, laughing. “Oftentimes, with a form bowl, it ends up being freestyle if I get a crack. . . . Wood allows you a little bit of margin for error, and I need it!”

Steve’s adzes are custom-made by local metalworker Glen Horr, who operates out of his Berkeley Springs workshop. While the solitary aspect of wood carving is part of the draw, Steve also appreciates the community of craftspeople it connects him to. “Each one of these places I go to,” he notes, “are small businessmen working with wood in one capacity or another, and that’s important to me.”

Many of his customers comment that the bowls are too pretty to use, but Steve stresses that they’re intended to be daily kitchenware. In fact, using them regularly helps preserve them.

“I make quite a few dough bowls,” he says, “which is what people used to let their bread rise in. They did not crack because the oils from the butter kept [them] lubricated. They only cracked when people quit making bread and the dough bowls dried out. You’ll see a lot of dough bowls now that are cracked just simply because they haven’t been oiled.”

In early Colonial America, treenware—wooden tableware —was standard. While metal and pottery were too expensive for the masses, most colonists and early American settlers had axes and could create their own wooden bowls, plates, tankards, and utensils.

At 75, Steve says he is “at the tail end of my experience with wood.” But he hopes that his hand-hewn bowls will become heirlooms passed down by his family, friends, and customers. He also hosts workshops in his Martinsburg home so others may learn the craft and share their bowls with their own families.

Though Steve may see his woodworking as distinctly different from his career as a social worker, his craft connects him to a broader social network of the past, present, and future generations. He muses, “I love wood. I love the feel of it. I love the smell of it. I love the grain and the figuring, and I like the idea that I’m making something that possibly will go on after I’m dead.”

To find out more about Steve Adams’ work, visit charlesstevenadams.com.